The usual design objective for impoundments and waste containment facilities is to maximize storage capacity. Thus, it is important to construct the side slopes as steep as possible. To reduce leakage from these facilities a liner system is usually installed that incorporates a geomembrane. For example, municipal and hazardous waste containment facilities in the United States are required to have a liner and cover system that usually consist of a compacted clay liner and geosynthetic materials. The geosynthetic components of these systems routinely include layers of geonet or drainage composite, geotextile cushions and/or filters, and a geomembrane. An important characteristic of these liner systems with respect to slope stability is the shear resistance along the various component interfaces. A number of case histories suggest that the geomembrane can create a problematic interface due to low frictional resistance between it and another geosynthetic component or soil. This technical bulletin describes some of the research on PVC geomembrane interface strengths that is being currently conducted at the University of Illinois. A forthcoming technical paper will describe the testing and results in greater detail and can be obtained from the PGI.

The PVC geomembrane being tested yielded a high interface shear resistance for the non-woven geotextile, drainage composite, geonet, and geomembrane-backed GCL interfaces investigated during this study. The high interface shear strength is attributed to the soft, "sticky," and flexible nature of the PVC geomembrane. In addition, the interfaces tested exhibit a small (less than 20%) post-peak strength loss, which may be beneficial in applications where a post-peak strength is applicable to design such as steep side slopes or seismically active regions. 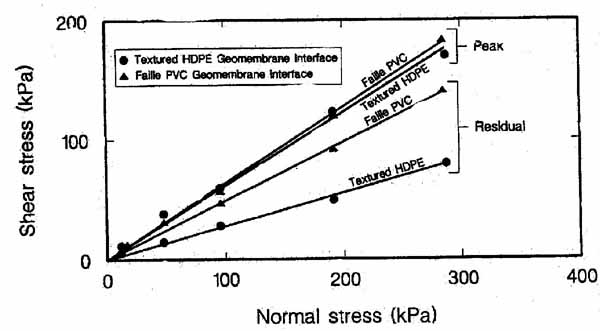