The usual design objective for impoundments and waste containment facilities is to maximize storage capacity. Thus, it is important to construct the side and fill slopes as steeply as possible. To reduce leakage from these facilities, a liner system is usually installed that incorporates a geomembrane. A number of case histories suggest that the geomembrane can create a problematic interface due to low frictional resistance between it and another geosynthetic component or soil. This technical bulletin describes some of the research on polyvinyl chloride (PVC) geomembrane interface shear strengths that was conducted at the University of Illinois. A forthcoming technical paper in Geosynthetics International will describe the testing and results in greater detail and can be obtained from the PGI.

Torsional ring shear (similar to ASTM D 6467 for cohesive soils) and large-scale direct shear (ASTM D 5321) tests on smooth and faille PVC geomembrane interfaces involving a variety of geosynthetics, e.g., nonwoven geotextiles, a drainage composite, a geonet, and a geomembrane-backed geosynthetic clay liner (GCL), were conducted to quantify the shear behavior of PVC geomembranes. For each interface, no significant difference was found between the ring shear and direct shear test results.

Effect of Geomembrane on Interface Strengths:

The PVC geomembrane tested in this study yielded a high interface shear resistance with the nonwoven geotextile, drainage composite, geonet, and geomembrane-backed GCL components tested herein investigated. The high interface shear strength is attributed to the flexible and soft nature of the PVC geomembrane. In addition, the interfaces tested exhibited a small (less than 25%) post-peak strength loss, which may be beneficial in applications where a post-peak strength is applicable to design, such as steep side slopes or seismically active regions. The following table presents the results of the PVC geomembrane interface testing and can be used for estimating the frictional performance of certain geosynthetic interfaces. Since the shear resistance of geosynthetic interfaces is project specific and product dependent, the data should be used for comparison purposes only and not design. 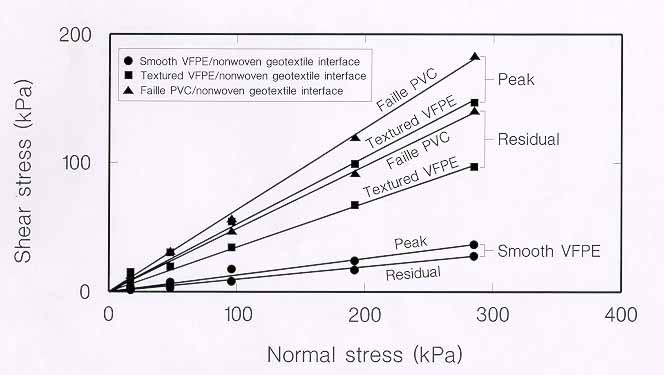 Summary of geomembrane/geosynthetic interface friction angles (for comparison purposes only*)

*Site specific interface testing should be conducted for design purposes.