In 1971, twenty circular aquaculture ponds were constructed for the W.K. Kellog Biological Research Station at the Michigan State University Facility in Hickory Corners, Michigan under a grant from the National Science Foundation. Eighteen of the ponds were for experimental purposes and two were for storage purposes. The ponds were allowed to colonize naturally with flora and fauna from surrounding lakes, and within a few years the experimental ponds closely resembled natural systems. These conditions provided the opportunity to conduct a number of significant experiments on species interaction and habitat selection in fishes.

Over time the ponds became congested with dense, persistent stands of cattails and other vegetation. These conditions made many types of experiments impossible, and thus, to start new aquaculture experiments, nine of the ponds were cleared and re-lined in September 2000. This provided a unique opportunity to exhume approximately thirty-year-old PVC geomembranes and evaluate their engineering properties. It is important to note that none of the ponds were leaking or exhibiting any problems during the thirty years of service. The nine ponds were re-lined with 0.51 mm PVC fish grade geomembrane liner fabricated in circular panels. Each new 1028 m2 panel was made of material supplied by Polyone, Incorporated of Burlington, New Jersey. The circular panels were fabricated by Environmental Protection, Incorporated. Woolf Excavating of Kalamazoo, MI installed the one-piece liners in ponds 4 through 8, 10, 16, 17, and 18.

On September 13, 2000, a representative from the University of Illinois at Urbana-Champaign (UIUC) removed samples of the nearly 30-year old PVC geomembrane from the ponds. The samples were exhumed from three locations: (1) the side slopes above the waterline, (2) the side slopes below the waterline and under the cattails, and (3) the bottom of the ponds. The samples were sealed in large plastic bags to minimize moisture loss prior to testing and driven to the UIUC. Some of the samples were then shipped to TRI/Environmental in Austin, Texas for comparison testing


Observations of geomembrane during excavation

All of the samples removed from the pond were soft and flexible, which is evident from their elongation at break values, presented subsequently, which satisfy current specification values. The flexibility of the thirty-year-old material also is illustrated in Figure 1 by photographs of a tensile specimen of the sideslope material from below the waterline before and during tensile testing. It can be seen that the specimen is undergoing substantial elongation during testing without rupture. Material removed from the bottom of the pond was softer to the hand than the material from above the water line, probably because of less desiccation. Once the samples were desiccated in accordance with ASTM test procedures, the samples were somewhat less flexible, which strongly suggests that exhumed material should be tested using in-situ conditions, i.e., without desiccation as required by ASTM Standard Test Methods, to properly assess the in-situ engineering properties. Desiccated specimens can be used for new material, but it is not recommended for exhumed materal because the geomembrane has already become acclimated to the field conditions.

At the center of each pond an inlet/outlet structure was constructed. This structure consisted of a concrete slab, approximately 0.75 m X 0.75 m, with the top level with the liner subgrade. The liner was placed over the concrete, sealed with butyl mastic, and fastened to the concrete using 38 mm X 95 mm redwood batten strips and concrete nails. This structure and the batten performed well over the nearly thirty years as indicated by no discoloration of the soil under the PVC geomembrane and around the structure. These observations also indicate that there was little, if any, leakage through the liner in the vicinity of the inlet/outlet structure. The mastic was soft and flexible after nearly 30 years, which resulted in an effective seal around the nails used to fasten down the strips. 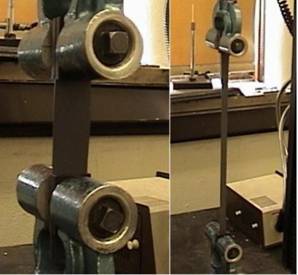 Figure 1.) Exhumed PVC geomembrane before and during tensile testing.

One of the most important objectives of this forensic study was to determine the effect, if any, of root penetration and microorganisms on the PVC geomembranes. The ponds were overgrown with vegetation, and had a large amount of cattails growing around the perimeter and in the middle of the ponds. As the bulldozer removed the soil from the top of the geomembrane under the cattail area, observations were made of the root zone of the cattails. These cattails produced one root stalk about 20 mm to 30 mm in diameter, with a mass of smaller roots around the main root. The root length was approximately 0.3 m to 1m. All roots of the cattails grew down to the PVC geomembrane and then grew horizontally along the top surface of the geomembrane. No evidence of roots penetrating the 0.51 mm thick geomembranes was found during field inspection or after holding the geomembrane over a light source in the laboratory.

Samples exhumed from above and below the waterline were tested at the UIUC to evaluate the effect of submergence and non-submergence on the engineering properties of the PVC geomembrane. Only samples exhumed from below the waterline were tested at TRI/Environmental. Samples from each location were tested in both the machine (MD) and transverse (TD) directions. The test results are compared to the National Sanitation Foundation Specification (1993), NSF-54, to quantify the changes in material and seam properties of the PVC geomembranes over the 29 years and 8 months of service. The NSF-54 specification was the applicable standard in 1971 when the ponds were constructed and was used for comparison purposes because pieces of the original material were unavailable for testing. To further evaluate the performance of the exhumed geomembrane, the corresponding values of the PGI-1197 specification are also shown for each test. The PGI-1197 specification, which became effective January 1, 1997, was developed by the PVC Geomembrane Institute (PGI) to fill the void left by the obsolescence of NSF-54,which was last updated in 1993.

Some of the samples from each location were cleaned and allowed to acclimate and desiccate in the laboratory for 40 hours according to the applicable ASTM standard test methods. Other samples from each location were tested without allowing desiccation in the lab by storing the material in a moist room until testing. This non-desiccation procedure was implemented to provide a better estimate of the in-situ properties by keeping the geomembrane at the in-situ moisture content. The non-desiccated material provides a better simulation of the field moisture condition, and resulted in a more flexible material and better engineering properties. The desiccated test results presented herein present a worst-case scenario for the engineering properties of the in-situ material. However, it will be shown that the measured properties of the desiccated samples still exceed the requirements of the NSF-54 and PGI-1197 specifications.  The applicable ASTM testing specifications are listed in Table 1.

Table 1. Summary of tests and specifications

The test results shown in Table 2 are for material that was obtained from near the bottom of one of the ponds and desiccated prior to testing. Review of Table 2 shows agreement between the test results obtained from the testing conducted at the UIUC and TRI/Environmental (TRI). More importantly, the results show that the thirty-year-old material properties exceed the NSF-54 required values and the more restrictive PGI-1197 values. For example, the tensile property data shows a sufficient percent elongation at break (greater than 350%) in both the MD and TD directions, which indicates that the material retained its flexibility. It can also be seen that the TRI/Environmental values of elongation at break are a little higher than the UIUC values but in agreement, and both exceed the NSF-54 and PGI-1197 values. Samples were also tested to determine the secant modulus of elasticity, a measure of geomembrane flexibility, which is calculated using the load required to achieve 100% strain. A low secant modulus indicates a softer, more elastic/flexible material, while a high modulus indicates a stiffer material. The secant modulus is approximately two times higher than the specified values which indicates some hardening over the thirty years of service. However, some of this hardening may be caused by the desiccation of the material prior to testing. The hardening also may have contributed to the tensile break strength values comfortably exceeding both specifications.  In summary, the engineering properties of the thirty-year-old submerged material exceeds both specifications even though the material was desiccated prior to testing.

The results of the water extraction and volatile loss tests also confirm sufficient plasticizer retention after thirty years. One interesting result from this testing is the water extraction data. The UIUC data indicates a gain in water during the test, as did the TRI/Environmental data albeit to a lesser degree. This may be attributed to desiccation of the material prior to testing, which reinforces that exhumed specimens should be tested at in-situ moisture conditions.

The factory seams were created using a solvent and the performance of the seams over approximately thirty years was of particular interest. It can be seen from Table 2 that the bonded shear strength exceeds the recommended NSF-54 and PGI-1197 values. Peel tests of the seams were not conducted because the solvent seams did not have a flap to permit peel testing. TRI/Environmental did not test a seam because the material that was shipped did not contain a seam. In summary, factory solvent seams appear to be extremely durable, which is important because PVC geomembranes can have 100% factory seams.  This facilitates installation and reduces installation costs.  On large projects some field seaming may be required and research is being conducted to investigate the long-term durability of field PVC seams, but factory seams appear to be satisfactory.

The in-situ results for the volatile loss and water extraction tests may be inaccurate because the ASTM procedure  involves weighing samples before and after the tests and the specification was intended to be used for desiccated material.  Therefore, the specification values are based on desiccated weights of the material may not be meaningful for material that was tested at this field water content. It is proposed herein that testing exhumed geomembrane at the in-situ conditions provides a better representation of the field behavior than desiccating the samples, Therefore, ASTM D3080 and D1203 should be modified to allow testing of exhumed geomembranes at field conditions.

After nearly thirty years of service in an aquatic environment, this 0.51 mm thick PVC geomembrane retained its flexibility and strength enabling it to perform as a successful water barrier. This indicates that plasticizer retention in an aquatic environment is not a problem even with 0.51 mm thick material. These results are significant not only because they support the use of PVC geomembranes in aquatic applications but also support their use in non-aquatic applications, because a non-aquatic environment is less problematic in terms of plasticizer retention. This is reinforced by comparison of the test results for material from above and below the waterline that shows plasticizer retention is greater the above waterline material in Tables 2 and 3. This case history also shows that PVC geomembrane material and its seams are not compromised or deteriorated by root penetration or microorganisms after nearly thirty years, even though the material was only 0.51 mm thick.