It's the first of August and a paper mill needs 2,000,000 square feet of geomembrane liner for a linfill liner to complete the final closure of two landfill cells before winter sets in. The supplier originally scheduled to provide 40 mil textured LLDPE will be months late shipping material.

The Georgia-Pacific paper mill in Parchment, MI was faced with just such a situation in the late summer of 2002.  Engineers from Blasland Bouck & Lee were encouraged to contact EPI to pursue PVC geomembrane as a substitute for the 40 mil LLDPE textured both sides, and still meet all permit requirements.  EPI worked with BB&L and the Michigan Department of Environmental Quality to provide all the information necessary for BB&L to revise the specifications and permit applications.  Revisions were made to the CQC/CQA plan to insure that all materials and welding methods would meet MI-DEQ requirements.

The project consisted of two cells.  The Type II cell was an ash fill requiring 598,220 square feet of 30 mil PVC liner.   The liner was placed directly on the fine, black ash material compacted on the 3/1 slopes of the cell.  The second area was a Type III waste cell that had been covered with two feet of sand material by Terra Contracting, LLC, the prime contractor on the project.  This cell would require 1,406,345 square feet of PVC.  The PVC liner would also be placed directly on the sand layer already placed over the Type III waste on slopes varying from 5/1 to 3/1.

Friction angle testing was conducted on 30 mil PVC geomembrane samples and the soilsType II Cell encountered at the site.  Smooth PVC met all of the factor of safety requirements for slope stability with the soils on the project.  There was no need to use a textured material because the smooth PVC soil interface friction angles were well above the minimum requirements for the landfill liner project. 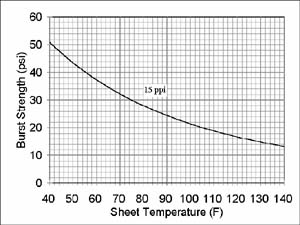 The Type II cell required 32 panels to cover the 598,200 Sq. Ft. footprint.  8,200 lineal feet of field seam would be required to seal the panels together on the 3/1 slopes of the waste pile.  Installation and thermal welding of the landfill liner started in September even before fabrication of all the material for the cell was completed.  The MI-DEQ requirements for weld testing for this project were;  Trial welds from each machine at the start and end of each welding session.  That meant trial welds needed to be tested in shear and peel at start up in the morning, before shut down at noon, at start up again after any break in welding (i.e. lunch), and finally again before shut down at the end of the day.  One sample for destructive testing of weld shear and peel strength would be removed for independent laboratory testing each day that welding was performed, no matter how much field seam was welded.

All field seams were also to be non-destructively air channel tested according to EPI established levels for air pressure and sheet temperature.  Based on research previously completed, EPI was able to verify peel strength exceeded the minimum requirement of 15 lb/in width on for the full length of EVERY field seam. 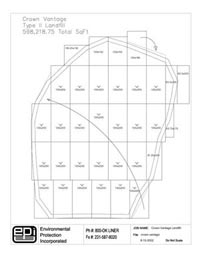 The much larger Type III cell required 72 prefabricated panels to cover the 1,406,345 square foot waste pile.  Most of the panels for both cells were 100 feet wide and 200 feet long.  Over 23,000 lineal feet of field seam would be required to weld the landfill liner panels together.  While 4+ miles of field welding may seem like a huge number, this is 70% less than the approximately 75,000 lineal feet (14 miles) that would have been  required with polyethylene.  Air channel testing of the dual track PVC welds also eliminated much of the destructive test sampling that would have been required on this project (>200 sample holes for polyethylene). 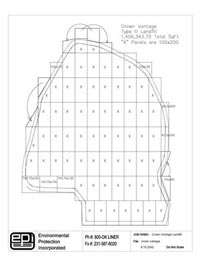 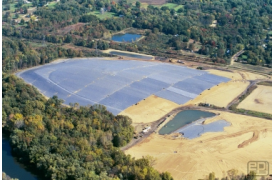 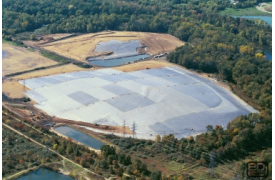 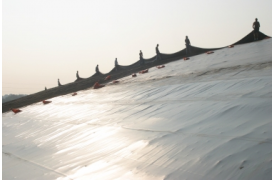 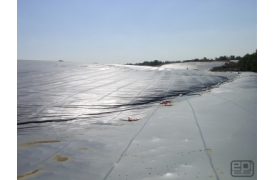 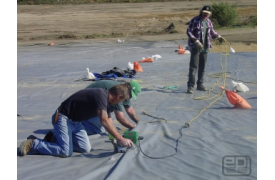